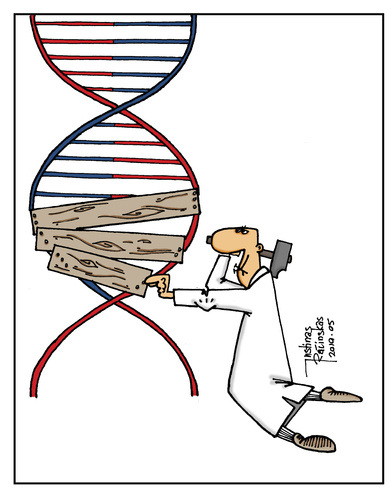 I am surrounded by historical documents about the rise and falls of empires. I have books about why things fail. And collapse. My bookshelf is filled with historical reference of all kinds. I’ll throw away my dictionary before I give up my history of feudal warfare. I could bore you with a list of them, but I need to get to a point soon. All these historians and experts drone on and on and on about the political climate of the time in whatever Empire that caused everyone to slide off the barometer and into the Dark Ages.

All of them love little details about what a jerkface Emporer Bluto was or what a tyrant General Betrayus or how the nation wouldn’t last long after the death of Admiral Numnutz.

But. Not a single one of them addresses this basic fact: DNA is everything.

(what are you on about, pinto?)

Shut up. You know how this works. I open with a hammer of some obnoxious thesis statement and then I explain it in some entertaining way.

Can I get back to my point?

Today, they are all shells of their former selves. The largest empires the world has ever known are now pitiful freakshow mirrors that reflect their faded and tarnish glory.

Well. In fairness, some have bounced back. But that doesn’t help make my point now does it?

What happened? Are all things destined to fail? Surly, that’s a conveniently easy answer. But the real reason is straight-forward-y, without being reductionist-y.

DNA (in this writer’s humble opinion) is everything. It measures a lot more success than we ever give credit for nowadays. After all, technology bridges most genetic gaps. But for the first 200,000 years of human development, DNA was everything. Strong DNA lead to strong warriors who protected weak DNA from stronger warriors from a different tribe. Etc. Etc.

Look. If you don’t know how ancient warfare worked, this isn’t going to be a fun read.

To make a clearer point, let’s take Mongolia par example. That’s an easy one. Where did all the strong Mongolian DNA go? West? Was it used to create a generation of healthy kids back in Mongolia? Or was it used to make 1/4th of all people still living in Eastern Europe today? That’s right kids. Genghis Khan did so much pillaging that his progeny are alive today in 1 of every 4 people in Eastern Europe and Western Asia.

Where should his DNA be? Mongolia. Instead, all those strong warriors with all that great DNA, they went somewhere else. And lots of them fought and died before every passing on their mitochondria. That’s kind of stupid. Not only did he weaken Mongolia, but he made Russia stronger.

Now. Apply that same logic to Rome. Legionnaires making babies everywhere but IN Rome. And show stays back and organizes the bureaucracy of Rome? Jerkfaces. Jerkfaces with bad DNA. Too weak to fight. Staying back in Rome where it’s safe and ruining the country. Caeser and his buddies are out making the Empire bigger and stronger, while back at home the Senate and the fatties who don’t want to fight are all turning Rome into a big soft gummy bear filled with gold.

Ripe for the pickings.

And guess who is alive today?

The descendents of the people who let the empires die.

Think about that. Every living person in those great nations fading off into the sunset and leaving behind the detritus to run the show. What were they thinking? Vikings would go and explore and leave the weakest people to run the tribe? Who was having sex while the Vikings were off for months at a time? Not the Alpha Males, I’ll tell you that.

I’m not a microbiologist. And right about now, I wish I was. But this seems like a pretty simple puzzle to decode. Strong people who go off to fight and conquer, leaving behind weak people to govern.

Time and again, every great nation follows the same principles. Strong goes away to fight. Weak stays behind to… not fight.

So. The next time someone writes a book about what was going on in Byzantium in 1099 that caused a chain of events that lead up to the fall of Constantinople in 1204. Just remember… weak DNA, coupled with royal incestuous behavior = stupid people making policy.

Now. There are exceptions. Attila the Hun was the only leader of the Huns worth mentioning. Ever. But they really weren’t an empire. Without a strong leader, they went back to whatever it was they were doing BEFORE Attila. Alexander’s Empire fell apart because his generals were greedy. He still didn’t leave a strong heir behind to run the place. The paradigm is continuous. Strong leaders who don’t leave behind strong DNA leave their empire in tatters to be gobbled up by the likes of the Tutors or Emperor Zhaoxuan (who really did a number on the Tang Dynasty with his concubine fascination).

All these leaders and kings knew the importance of strong lineages, even if they’d never heard the word DNA. But none of them thought for a second that maybe one strong guy wasn’t enough to keep the empire running?

Think about that next time you’re building a new fantasy world about mighty empires.