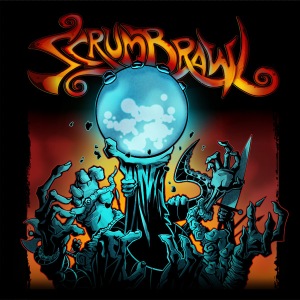 Let me be very clear. I want to love this game. I really do. The theme is right up my alley and the cards and art are gorgeous. Very dark and hard to read, but gorgeous.

This game plays like a 1980s board game where every arrow is tracked and Charisma has been split into two traits to recognize the difference between charming people and pretty people.

First off. The game feels like an unfinished prototype. It’s close, but not finished. More on this later.

Second. The game has too many stats. There are four card types and monsters (being the most important) have SEVEN things to track on each one. Passing, Catching, Range, Movement, # of Attacks, Attack Value, Defense Value. Not only is that a ridiculous delineation of values that do not matter, it’s just not fun.

Third. We felt like playtesters and not players. We were so busy fixing the broken parts of the game that we didn’t get to enjoy it’s soul. And it has a soul…. but….

Four. It’s buried under a need to control things that don’t need to be controlled. The sheer volume of rules (printed in a small typeface of course, because all gamers are 12 years old with 20/15 vision) indicated that the designer was more interested in stricture than fun. It’s a smash-up variant of the old “smear the queer” game we played as kids. Why do I need so many rules for how and when

Five. The turn order system made no sense. If I can’t move or fight with a monster on the turn he is summoned, then why am I allowed to summon him before the movement phase? Amateur mistake.

Six. The monsters are not balanced against one another. And in a game like this, they don’t need to be. But when everything is getting in the way of the fun, these issues of balance are glaring. Make your game fast and furious… make it feel like a real scrum… and no one will notice your game cards aren’t balanced.

Eight. Dead cards. Most of the deck is monsters. But the monsters cards are useless in my hand once I have a full complement of three monsters in play. These cards needed to have numeric values at the bottom, so I could spent them like “alter reality” cards. See the new edition of Wiz-War on how to bring this to life.

Nine. Which brings me to my final comment. Wiz-War does nearly everything this does, but better. There is really nothing new here and it’s a shame, because it has so much potential.

In all, there is a fun little game under all this mess, but you have to do work to find it. If I was the developer on this game, I would have given a lot of notes back to the designers on how to streamline everything. We already decided to use d12s instead of d20s, cutting off 40% of the board, thus increasing the chances of fights and what-not. Since the game lacks rising tension, inherent in the design, a shorter game is necessary. Which is accomplished with more scoring and more deaths on a smaller board. You could ever play to 5 points, and on a 40% smaller board, you’d be playing shorter games. Cut down the stats from 7 to 3. Skills, Movement, and Combat. That’s all you need. The rest is just splitting hairs. Flying needs to be more interesting too and on a smaller board it just might be.

We have some ideas for incorporating diagonals as well. A lot of work for a game I paid full price for.

Sorry. I don’t have a good ending to this post. It’s nearly 4am.